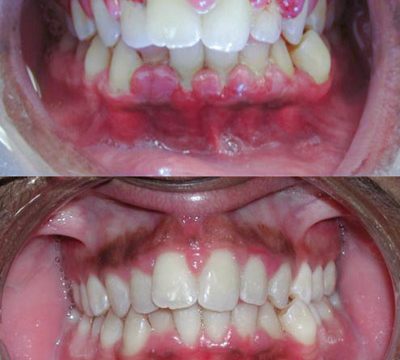 The most common cause of gingivitis is the accumulation of bacterial plaque between and around the teeth, which triggers an immune response, which in turn can eventually lead to the destruction of gingival tissue, and eventually further complications, including the loss of teeth.

Dental plaque is a biofilm that accumulates naturally on the teeth. It is usually formed by colonizing bacteria that are trying to stick to the smooth surface of a tooth. Some experts say that they might help protect the mouth from the colonization of harmful microorganisms. However, dental plaque can also cause tooth decay, and periodontal problems such as gingivitis and chronic periodontitis.

When plaque is not removed adequately, it causes an accumulation of calculus (tartar – it has a yellow color) at the base of the teeth, near the gums. Calculus is harder to remove, and can only be removed professionally.

Gingivitis may also have other causes, including: